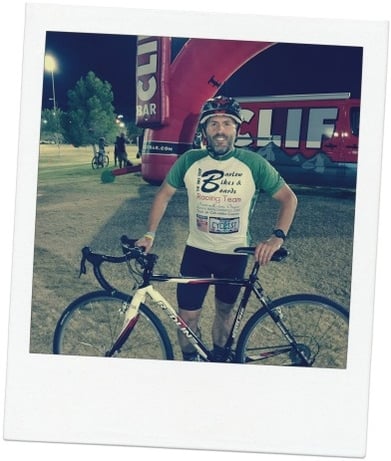 Paul Barlow is the Race Director for Cycle Columbia County and owner of Barlow Bikes and Boards, the local bike shop in St. Helens, Oregon.

As kids and BMX bikers, Paul and his brother Phil told their local bike shop owner, Bob Clammer, they would buy that shop from him one day. Later, Phil made that dream a reality when he approached Bob, and Bob agreed to sell in 2001. Paul and Phil ran the shop together until Phil passed away in 2011.

Between spending time with family, owning a business, and directing several cycling events, Paul also makes the time to ride 40 events a year, sharing his enthusiasm and joy with anyone interested in the world of cycling.

Why in the world did you become a race director?

I wish someone had exposed me to the cycling world when I was much younger, and ever since I’ve been an avid cyclist I have tried in every way possible to expose anyone I can to the joy cycling can bring to one’s life.

If you were an animal or vegetable, which specific animal/vegetable would you be and why?

Eagle because they are so graceful when they soar across the skyline scouring the landscape below.

How many events do you put on every year?

Customer service. This is our first year with imATHLETE and every one I have dealt with has been great to work with, courteous and quick to respond and willing to help out.

What do enjoy most about being an event organizer?

Seeing the joy and satisfaction on participants faces. Witnessing friends and families, regardless of their background, all competing on the same level and having a good time.

If you could go back and give yourself one piece of advice when organizing your first event, what would it be and why?

Don’t be so hard on yourself because we are selling fun, typically everyone is just there to have a good time and most people are pretty understanding and good hearted if there happens to be a small glitch.

Have you ever done a themed event? If yes, what theme? If not, would you?

I have for the past few years hosted a Halloween scavenger hunt bike ride and it has gone well. It’s low-key and participants pick up their packet and instructions here at Barlow Bikes and are scored based on time spent on the course and number of clues discovered.

Trail or Road? Cake or Ice-Cream?

Trail, cake and ice cream, can’t have one without the other.

What Loss Aversion Can Teach You About Promoting Your Race