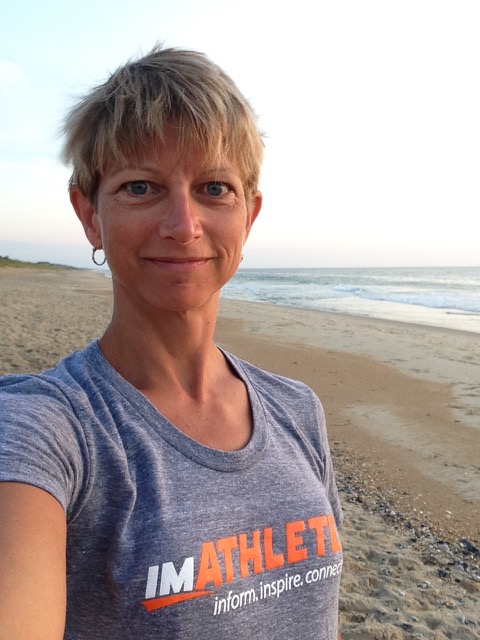 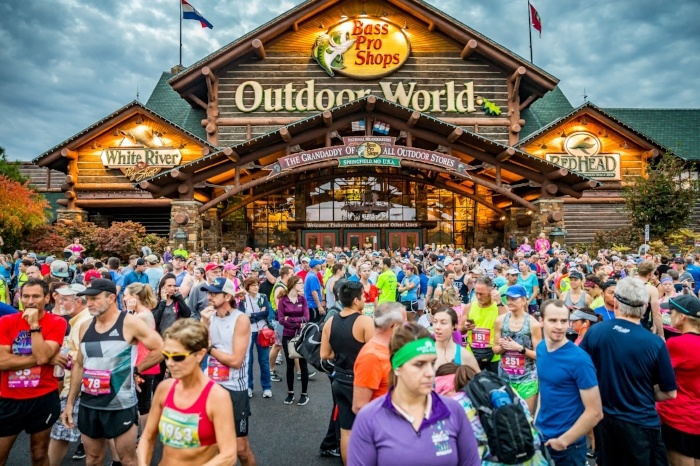 I had the pleasure of speaking with Melissa Bondy, Director of the Bass Pro Shops Fitness Series based in Springfield, Missouri. We spoke for an hour, with her at her standing desk (pictured), and me…sitting (not pictured).. 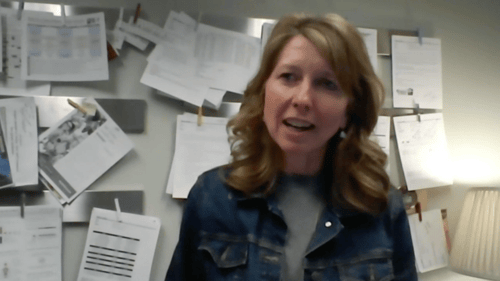 It quickly became apparent that she is absolutely perfect in her role as race director, overseeing multiple events that include Run the Rock (6 mile trail run), Tour de Bass (cycling), Rock 4 Kids Running Series, and the Dogwood Canyon Trail Run Weekend (15K, 25/50K). Their largest event is the Conservation Marathon weekend on November 4th that includes the Conservation Marathon Relay, the Cohick Half Marathon, and the News-Leader 5K.

Melissa has an undergraduate degree in psychology and Master’s degree in educational and counseling psychology. She spent years working in student development and fitness; that grew into a passion for total wellbeing.

It was a 5K for a local YMCA that used a “tic sheet” for timing, with manual recording of times as entrants crossed the finish. “I got to watch people’s reactions, and I got to be part of the training process for them.” She saw the impact that these events could have and it was the seed for something much larger to come!

From Volunteer to Race Director for Bass Pro Shops

Upon moving to Springfield, MO, she reached out to Bass Pro Shops who had just begun their fitness series (~2007). She served as a volunteer in 2008 and 2009 and worked to learn all she could about the events. In 2010 she was asked to come on board to lead the series. The job that was described as 10-15 hours per week to start, very quickly ramped up to 40! 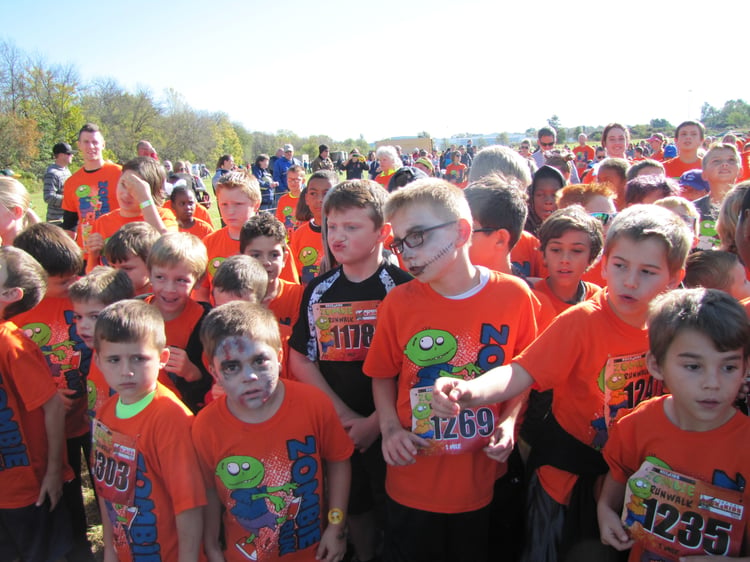 The Zombie Run, part of the Rock4Kids Series

The mission of Bass Pro Shops is to “inspire people to love, enjoy, and conserve the great outdoors.” The Fitness series is an integral part of that.

“It’s about helping people become who they know they are internally, and that is what these events have the potential to do. What we do is very driven by the fact that we know what happens to people when they reach their goals, whether they are cycling, running, swimming, or walking. When their lives change, the lives of the people around them change, and it changes the family dynamic and everything around them.”

“When I moved back to Missouri after I was married, I thought people would be outside. I’m from Minnesota, people are outside all year round. It doesn’t matter if it’s 40 below zero, you’re still outside, that’s just what you do. And when I moved here, I thought it would be that way since the weather is so much nicer. What I found was people didn’t get out, they didn’t get moving. I wouldn’t see people running or cycling though the city.”

That didn’t bode well for local participation for the Fitness Series. So the first thing they did was to enhance the organizing committee. They worked cooperatively with local government, local businesses, and the police department.

When they first reached out to the police department, there was a lot of pushback with “No, you can’t do that.”

“Now they say, ‘sure you can do that, absolutely, you can run down the busiest road in the city, and we’ll close it off all day long for you.” They understand the purpose and importance of these events.”

They work cooperatively with the area running groups such as the Ozark Mountain Ridge Runners, founded by Maynard Cohick (for whom the half marathon is named). There is a Jeff Galloway running group that is organized through one of the local hospitals that was created as a direct result of the hospital’s interaction with the Fitness Series.

“Now, I see people running every day, all over the town!”

“When you talk to people who run with us locally, they have a tremendous sense of ownership in these events and they are very proud of them.” 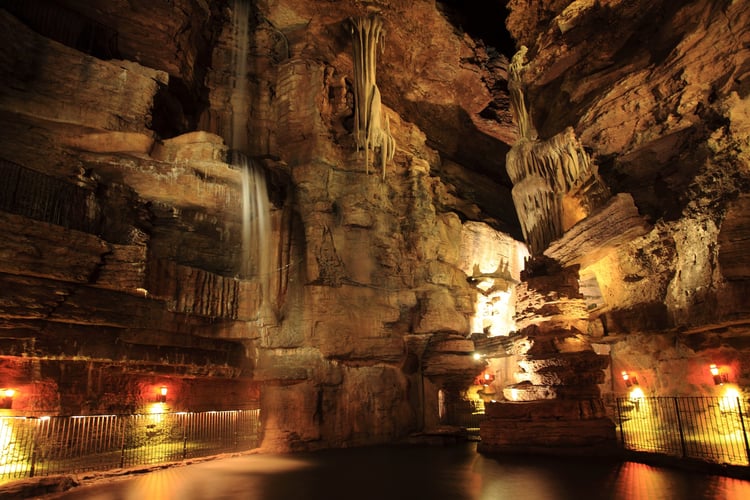 participants in the Run the Rock come through this cave!

Melissa notes that sponsorships have become harder to obtain so it's important to demonstrate real value to sponsors.

“We look at sponsorship as a true partnership. They are invited into the process. Of course, not all sponsors want that, they just want to be connected to what you are doing, and that’s OK too.”

Sponsors see this as an opportunity to get to know their customers better, to ask questions, and find out what they want.  Above all, Melissa makes sure each sponsor derives a benefit from their association with the Fitness Series.

The expo began under Melissa’s tenure despite the fact that the organizing committee and initial leadership did not feel confident that it could be successful. The first expo had five vendors in the parking lot on race day. Two years later the expo moved to a new convention center and since then it has consistently attracted 40-50 vendors.

She makes sure that the expo vendors are an appropriate fit. She uses the example of window and door companies, or HVAC companies, which are sometimes found at other running expos. “That’s fine for others expos, but I don’t see how the vendor benefits. People aren’t there to buy windows. The participants don’t benefit because that’s not of interest. Nobody wins.”

Melissa then tossed out a question of her own, “What do RDs see as the future for expos? With more packets being mailed out, that reduces the number of people walking through the door.” She noted changes in how much time people spend at expos, a reduction in programmatic offerings like speakers, and pasta dinners falling out of favor.

You can tell she doesn’t settle for the status quo. She questions, challenges, and considers how all the stakeholders and components intersect.

The Bass Pro Shops Fitness Series works with up to eight charities a year. These charities use the events as fundraisers, with participants running|walking|cycling on behalf of the cause. It’s important that these are in alignment with the mission of Bass Pro Shops who underwrites the Fitness Series. All the proceeds go to charity, which is very much in line with the nature of Johnny Morris, the founder of Bass Pro Shops, who is an “incredibly giving person.”

I asked her for an example of something that has gone awry at a race.

“My first year as a paid employee in 2010, there was a committee that handled packet pickup, They said ‘we are going to do it the way we want to do it, and that’s just the way it is.’ So I just remember standing there going ‘what in heaven’s name are we going to do.’ We had our packet pickup out in the parking lot, with a team of probably five or six people, but there was only one person who was allowed to touch the bibs. One person! And we had a ton of late registrations. Our timer, who should have been there for packet pickup, didn’t show up until the next day. So I’m standing there, and there’s a line of people almost around the building to pick up their packet. I said ‘guys, this isn’t working.’ So I learned very quickly and the next year gently said, ‘we’re going to be making some changes about how we go about these processes so we are better able to serve people.’ They couldn’t disagree! That was a live-and-learn piece. Never again did that happen.”

“It is a reality of what we do, that nothing is ever perfect. You can’t be in all places at all times, so if you’re a control freak, there’s value in that, but you’re going to give yourself a heart attack. There’s just no point. You have to come into it with the understanding that things won’t be perfect, but you have to do the very best you possibly can to ensure the runners have their best experience.”

When asked about other changes she has seen, Melissa sites greater participation by women. She believes more women are recognizing the importance of self-care.

She also sees a stronger draw of participation on behalf of causes, driven perhaps by millennials. Yet she finds participation among the lower age groups – the early 20’s - down. .

Participants are doing fewer events per year. She believes we are in a bit of a “market correction.”

“Now it comes back to us to demonstrate value, if they aren’t going to run seven events per year, but are only going to run three, what factors into the decision about what they choose to run? Some of that is loyalty,  That’s your least costly group and you want to continue to support them. Getting those new people to try your event when they are being much more selective, and maybe not spending as much money on travel, it’s a challenge.”

“It’s important to make sure that people know who you are and the ‘why’ of what you’re doing. If it matches their ‘why’ or they can find some sort of value in that, then they’re going to come, and they’re going to stay with you.”

At this unique event, all local races are invited to bring their leftover medals and t-shirts. There is a six mile route for people to run, but they can choose to run any distance because it’s not timed. When they finish, they can pick a t-shirt or medal from any event. They’ve had up to 400 people turn out for that!

They also have a Happy Hour for anyone who has registered for any event. It features a related speaker on topics, games, and just fun! This is to help people connect to why they are running, connect to one another, and connect back to the local running community.

What advice would you give to yourself as a new RD when you began?

“Remember to celebrate the success. Sometimes you can get so caught up in what you want to fix, that you forget to really take in the success.” 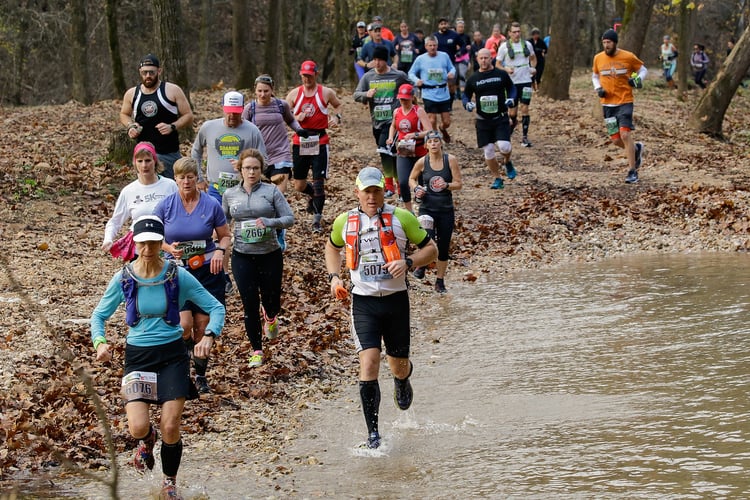 The Value of Race Shirts

What is your favorite thing about imATHLETE?

“It’s the customer service, the people that work behind the scenes. I have absolutely enjoyed that. And to me, that’s #1. What you put forward facing for athletes who want to participate is exceptional, it’s an easy platform to navigate. For me, behind the scenes, as someone who has to solve problems, I have appreciated Dachelle. (RD support for imATHLETE). She is wonderful, absolutely wonderful, and I value that more than anything. I know I can go to her and if she doesn’t have the answer, she’s going to get it, and she’s going to be straight-up with me.”

Having experienced a customer service failure with another company, she values that above all.

“Deer. When I see deer on my morning runs, and I see them very frequently, I will stop and converse with them. I have great conversations with them, and even though I’m sure it’s not registering, I picture myself as a bit of a ‘deer whisperer.” 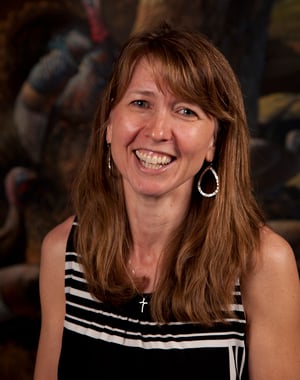